I'm Dr Bruce Damer and this website is now an archive dedicated to my past projects. Where possible, they are presented here in their entirety.

DigitalSpace was an international corporation with a leading practice in virtual worlds for industrial design engineering, education and public outreach.

Established in 1995, DigitalSpace produced some of the first Internet-based 3D "avatar" applications including virtual events and tradeshows, learning spaces for K-12 and college, corporate information sharing spaces, and virtual worlds for artists.

Which despite its clunkiness contains some interesting historical content for his early work and projects.

In its original incarnation from 1996-2015 Biota.org promoted the dream and helped develop technical approaches to using virtual, digital spaces to simulate biological systems. This effort carried the deeper objective that Humanity might one day understand the very process of emergence in complex systems, and with that, how life itself might have begun.

As a special interest group (SIG) of the Contact Consortium (www.ccon.org) Biota started out with its own speakers in a special section of the 1996 and '97 Avatars conferences in San Francisco.

In September of 1997, conceived and hosted by Biota's founder Dr. Bruce Damer, the group sponsored its first conference called Digital Burgess, held at the Banff Center in Alberta, Canada.

During the conference, leading researchers in early life, artificial life, artists and a Discovery Channel crew all trekked up to the nearby famous Cambrian fossil quarry of the Burgess Shale.

In 1998, '99 and 2001 Biota hosted or collaborated on three more conferences, in Cambridge in the UK (www.Cyberbiology.org), at San Jose State University in the USA and at UC Berkeley also in the USA.

From 2006 through 2012 Tom Barbalet hosted numerous episodes of the Biota and Biota Live podcasts (archived at www.biotacast.org) with a few more recent ones up to 2020. These featured leading developers and thinkers in the Artificial Life and complexity science movement at that very creative time. Dr. Damer features in many of these podcasts as he developed his ideas through the EvoGrid (PhD work 2008-11) and the beginnings of his collaboration on chemical scenarios for the origin of life with Prof. David Deamer (2010-12).

After a nine-year hiatus of activity Biota is being revivified in 2021 as the BIOTA Institute with a new site at www.biota.org with the objective of providing support for students and young scientists working in the field of the origin of life.

The DigiBarn Computer Museum seeks to capture personal stories and track technological evolution through a large collection of vintage computer systems, manuals, videos, interviews, and other fossil relics of the "Cambrian explosion" of personal computing that ignited in 1975.

Avatars! Exploring and Building Virtual Worlds on the Internet

This book provides a guided tour of avatars--graphical representations (a smiley face, cartoon character, or even a photograph of yourself) of online chat participants that are set in a virtual space against landscapes ranging from the real to the surreal. 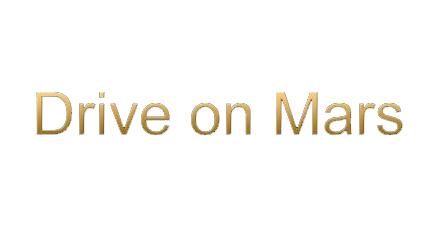 A virtual world web plugin enabling you to drive your own Spirit or Opportunity rover on Mars.

This DigitalSpace application was launched with NASA support at the time of the landing of the two rovers in 2004. The Atmosphere plugin was powered by Adobe Atmosphere (and is no longer supported). 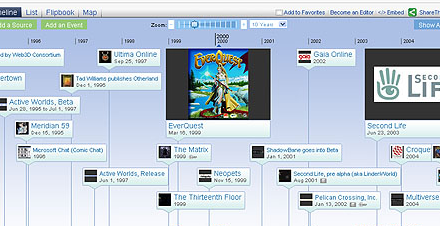 A personal project site by Dr. Bruce Damer chronicling the history of the emergence of multi-user "avatar" virtual worlds on the Internet, used the Dipity timeline technology (now discontinued). 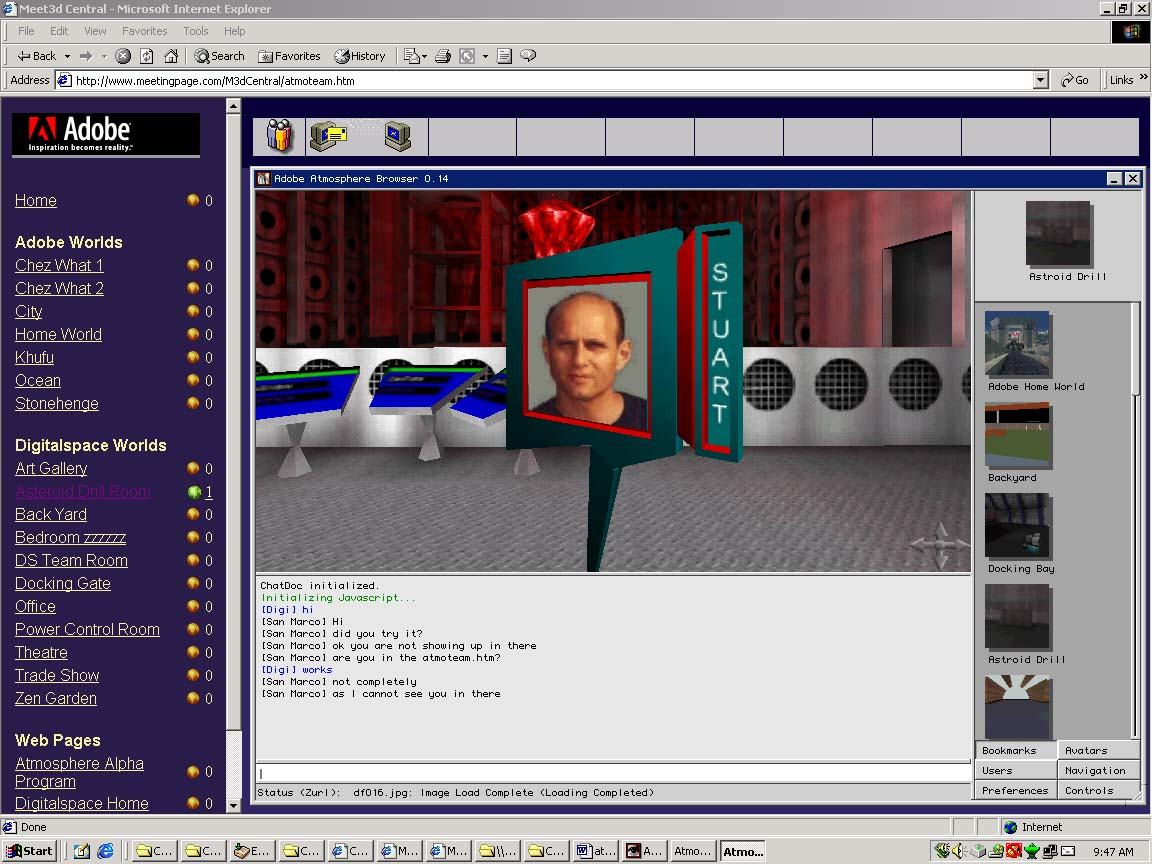 A site developed by DigitalSpace under contract with Adobe when Dr. Bruce Damer was engaged as an external expert and 3D evangelist for their development and launch of the groundbreaking avatar 3D virtual world platform Adobe Atmosphere (known as "Atmo").

Notable worlds built using Atmosphere included DriveOnMars (see site on this page) which allowed users to land and drive a 3D version of NASA's Spirit and Opportunity rovers on a virtual Mars landscape. This was one of the first platforms supporting real time physics (via the Havok engine) which allowed the virtual rovers to bump along.

DigitalSpace used "Atmo" to deliver other projects for NASA including a "Lunar Hazard Yard" to test lunar robotics on slopes and in "negative traps" (small deathly craters).

Another notable DS project was a virtual fashion show done with students at the Fashion Institute of Technology in New York City under the guidance of Prof. Daria Dorosh and Galen Brandt.

Find more about the Adobe Atmosphere project over its lifetime from 2000-2004 here: https://en.wikipedia.org/wiki/Adobe_Atmosphere 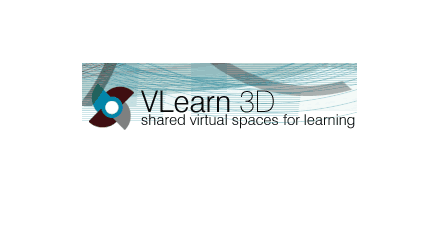 A Special Interest Group of the Contact Consortium devoted to the use of avatar virtual worlds for learning.

The project was led by Margaret Corbit, Bonnie DeVarco and others and featured a number of online cyber-conferences using 3D platforms. 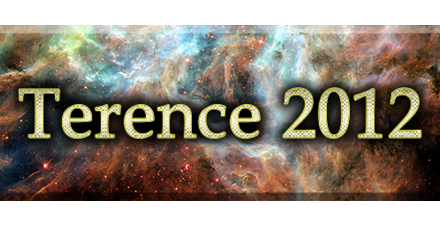 A celebration of the life and thought of Terence McKenna brought to life by Dr. Bruce Damer, Lorenzo Hagerty, Dennis McKenna and others in the year 2012.

Several events were featured including a two day gathering in Sierra Madre, California, the Esalen Institute in California and at Burning Man. 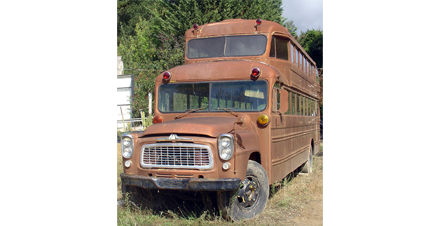 The bus was named in honor of Ken Kesey's bus "Furthur" which helped launch the psychedelic 60s.

NoFurther is a 1960 International Harvester conversion with a 1939 school bus shell on top, giving it 9 foot ceilings and two lofts. It is one of the only examples of a "bus-on-bus" custom bus.

Cyberwearz was an early project of Dr. Bruce Damer and creative collaborators at the sewing club to design and build an elaborate, 21st Century Rennaissance inspired garment for wearable electronic devices, or what would Cosimo Medici wear if he was living in 2004?

See how the Cyber-doublet and its predecessor emerged, step by step in the bus garment art studio NoFurthur. 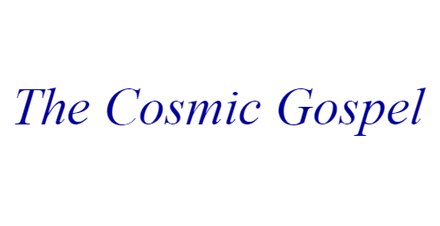 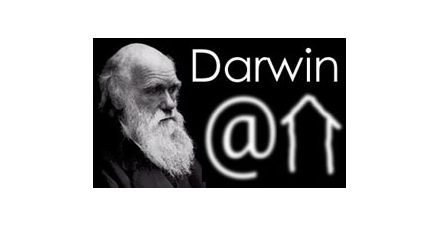 Darwin@Home was a project in 2009-11 to promote distributed computing for emergence and origin of life chemistry.

While SETI@Home was looking for signs of an extraterrestrial signal from the cosmos, Darwin@Home would distribute computing volumes of chemical "primordial soups" in search of the signals of complexification that indicate structures and functions on the way to life.

This work was realized in its first instance in Dr. Bruce Damer's PhD thesis and its associated project The Evolution Grid (EvoGrid) completed in 2011.

A grid simulation was run first in the DigiBarn Computer Museum and then moved to CalIT2 at UC San Diego for a successful completion in May 2011. His thesis was successfully defended in July 2011.

The Gnostic Way was inspired when Dr. Bruce Damer attended a 2004 lecture by Elain Pagels at Stanford University and by his reading of her translation of the "Gnostic Gospels" found in the scrolls of the Nag Hammadi library discovered in Egypt in 1945. 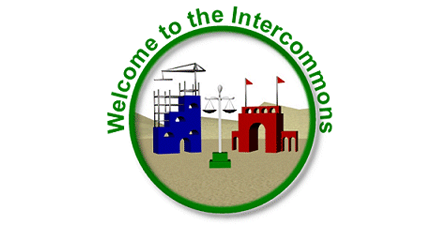 The Intercommons (definition: Internet Commons or Interconnection of Commons) was an initiative of Dr. Bruce Damer and his company DigitalSpace to promote a clearing house and research and development forum for ideas and designs for new forms of human organization using the medium of Cyberspace.

The project was floated as a trial balloon from 2001-02 during the period of the launch of the Creative Commons, on which Dr. Damer was contributing.

It was felt that beyond new forms of granting rights to copyrightable objects, perhaps would rise new organizational forms and shared ownership of intellectual property current in the patentable domain. 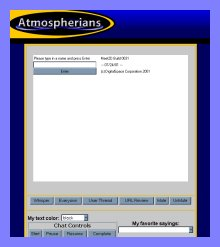 A Java-based 2D chat client applet which supported some nice parameterized features, Meet2D could be started up with any skin and included javascript controls for chat control, logging, text parameters, and url reviews.

This application was beta tested by the Stanford Alumni Association and used for the Adobe-sponsored Atmosphere user community. 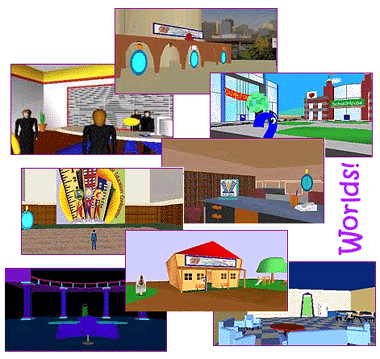 The effort was spurred by the growing list of school tragedies such as the Columbine massacre.

AIG is one of the largest insurers of teachers so wanted to support new forms of virtual learning with the effort.

Built in the Spring and Summer of 2000 by DigitalSpace it was a truly "thin client", one of the smallest 3D applets (35k!) to support a multi user avatar presence.

The contract developer team was led by Robert Bjarnasson of Iceland who delivered the applet on the Shout3D platform. 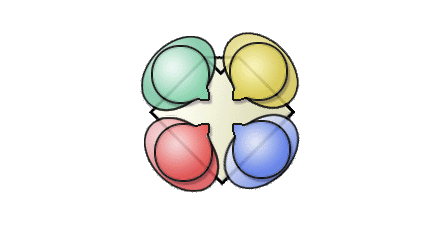 A project undertaken by Stuart Gold of DigitalSpace around 2000-2001 to implement one of the first SOAP interfaces to the World Wide Web providing real time support for virtual communities.

Long before Facebook, MeetingPage pioneered the use of in-web entries of users and their current state enabling interacting with others and shared web browsing.

A central frame could provide shared pages such that a plug-in such as Adobe Atmosphere or a java-based 2D or 3D chat interface could be logged into by live users on the left tab.

A patent was filed on this technology but later abandoned. 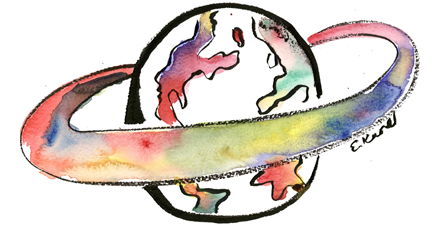 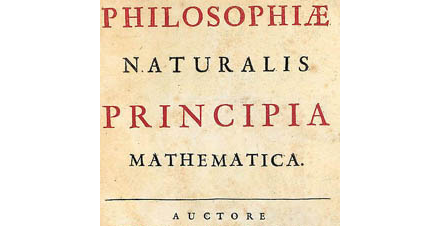 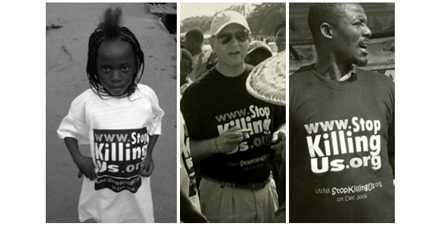 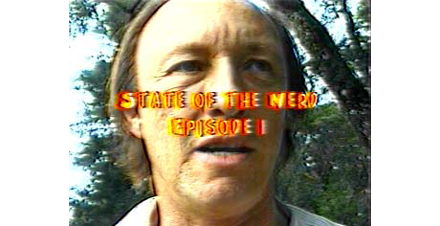 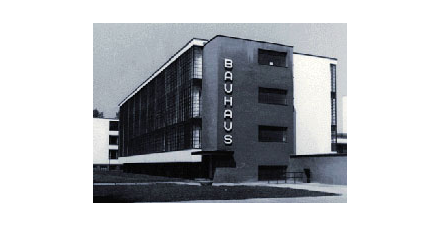 A project in concept dedicated to bringing the design sensibilities and mission of to the famous Bauhaus School which operated in Germany in the years 1919 to 1933.

Bauhaus are to live within the medium of multi user virtual world cyberspace in the 21st century then perhaps there is a need for a new bauhaus, presenting design ideas in a space where gravity doesn't apply and where social interactivity, action, cognition, or knowledge representation are the embodied goals of the design challenge.