March 11, 2013 - World premier of "Fall and Winter" at SXSW in Austin, Texas. This is a documentary about the human condition and future. Features an interview with Dr. Bruce Damer. View the trailer on Vimeo here.

January 31, 2012 - Dr.Bruce Damer turned 50, and he and Dhiren Dasu produced and released the fun video "Who is Bruce? The First Fifty Years" to celebrate.

May 28, 2011 - Bruce Damer's second Spotlife performance "The Levity League" was performed at the Broadway Playhouse in Santa Cruz, thanks Fun Institute (trainers) and Allan Lundell (video).

August 30, 2010: Inside The Metaverse documentary by VISUALANTICS features a number of clips of Bruce, see the trailer here on Vimeo.

January 8, 2010: Bruce is featured in a video interview of Lee Felsenstein and being interviewed presenting one of the oldest Altair 8800 kit microcomputers by Daniel Terdiman of CNET in this story on News.com: Inside the world's long-lost first microcomputer

May 14-18, 2009: Bruce Damer and Galen Brandt visited and jointly presentated (see above) at the HUMlab at Umea University in Umea, Sweden in celebration of the opening of the HUMlab II expansion. Galen's individual presentation was "Tiny Dancers, Singing Fish, Burning Man: Virtual Worlds, Real Stories" and Bruce presented "Will Bona Fide Life Evolve from within Human Technology (and what are the consequences of this happening)?" and a second session on the history of computing. See the joint presentation made by Galen and Bruce above.

Bruce presented the EvoGrid at Dorkbot San Francisco @ the Gallery With No Name on Folson (Fusso, Herzbach). View the HD Vimeo video here, thanks James Young of Pronoiac.org!! (April 8, 2009)

Bruce and others from the Digibarn crew and others appeared on stage at MacWorld 2009 in San Francisco for their part in the new feature documentary MacHeads the Movie (January 7, 2009) 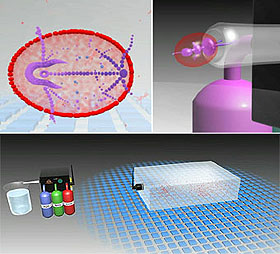 Bruce appeared in a special program on Steve Wozniak on American Life TV: Moments that Changed Us (Dec 5, 2008)

View Vimeo video of Bruce Damer talking about Near Earth Objects (NEOs) an the risks and opportunities they pose, at the IEET workshop on GLOBAL CATASTROPHIC RISKS: Building a Resilient Civilization (November 14, 2008) MP3 audio is here. as well as a complete transcript (thanks Drew!)

Bruce and his 'iDoublet" design on the runway in the Second Skin fashion show,
Video and Photographs at www.cyberwearz.com, Exploratorium, San Francisco, CA (April 25, 2008)

Bruce Damer is featured in the Discovery Channel two part series: Human Body, Pushing the Limits. See Bruce in Part 2: Brain Power (recorded in May 2007). Play excerpt below (posted by a fan on YouTube):

January 2008 - Bruce Damer and Allan Lundell quoted in several special stories by Tom Merritt in his series "Tales of Silicon Valley" about the Digibarn Computer Museum.

October 5, 2007 - Bruce Damer's design simulation movie (produced for NASA by DigitalSpace and DM3D Studios) of a human mission to an asteroid, as featured on Space.com.

May 2, 2007 - Bruce's Waag Society presentation "What did Spock See?" for Cyber Salvations in Amsterdam, audio, slides here. and slides on slideshare.

Al Lundell produced this ten year documentary retrospective of Bruce Damer's Earth to Avatars '96 and Avatars 97, the first conferences on avatars and virtual worlds on the Internet (produced for a history of virtual worlds presentation at Linden Lab, October 2006).

Other Recent Online Video of Bruce and his projects

(cc) 1996- Bruce Damer... want to use something from this site? See rights granted under my Creative Commons license and contact me.